I appear to have missed a few days. I’m trying not to slip off the blogging wagon again.So this is a rant, sorry in advance, skip it if you want to.

I have about a 40 minute drive each way to get to work. I have a car with a cassette player that chews up cassettes. And other than that I have a slightly crappy radio. Which would be fine except that commercial radio is the worst thing in the world and it’s guaranteed to destroy your soul and make your brains melt out of your ears. 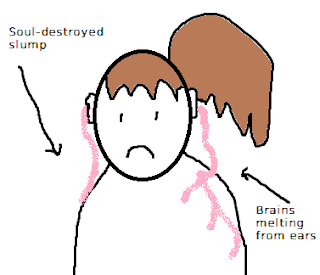 There is no need for so many repeated adverts. Once or twice in a 40 minute journey should be fine. I will get the message. I have literally no idea what JCT600 is, but I know it was shouted at me from the radio innumerate times today. It makes me hate your product/service/business and makes me never want to patronise you EVER.

Incidentally. I am not against the armed forces per se, but I have one massive issue with them, and that is the reserves. We are not under attack, we do not need a standing army, and I don’t want my taxes to pay for them. I was approached once to join the RAF reserves and basically advertised to with stories of drunken hilarity and guns, all paid for. Which frankly, makes me sick. And now I’m having it blasted at me over the radio as well. I’ll tell you what, rather than joining the Navy reserve to “learn extra skills and gain new experiences” how about you do that by taking some time out and WORKING FOR A GOOD CAUSE.

Aside from the adverts, commercial radio has the most vapid hosts in the history of the world. I couldn’t care less whether or not you, male radio presenter, like One Direction more than your girlfriend. That is for you and her to work out. I should not have to be involved.

And aside from the adverts and the vapid hosts, comes the worst bit of commercial car radio. The music. It is repetitive, badly mixed with the rest of the program, and built up far too much. If you say a song is coming on NEXT, please put it on NEXT, not in 10 minutes after 4 other apparently inferior songs and a host of mindless drivel parading itself as adverts. The same applies if you say a song is COMING UP or AFTER THIS. Don’t lie to me. Don’t lie to your listeners, why would that ever be productive?

These are the stations my radio receives here in West Yorkshire, and this is what I think of them:

BBC Radio 1 – will hardly ever tune in, I’ve never heard any of the music and the host is being pretentious and hipsterish about it anyway.

BBC Radio 2 – not in my car apparently.

BBC Radio 3 – as above. I don’t even honestly know whether Radio 3 exists.

Leeds Radio Aire – Trying too hard to appeal to a young audience, specifically through constant playing of Olly Murs (who is actually not bad, but please, ONCE per journey, thank you)

Capital FM – The radio station with the most acceptable taste in music and the worst taste in hosts.

Classic FM – I can receive Classic FM no matter where I am, which is slightly wonderful because I love classical music, but slightly awful because any time the host cuts in I instantly feel guilty for not having a clue who the composer of the piece is.

OK, rant over. Feeling much better now, thanks.