Today has been a long day. It began with me rolling out of bed and wandering into town to meet the lovely Madame Halima who was going to take me clothes shopping for a Caftan. I got to the bank where we were meeting a little early, so I went inside (it was raining) and waited.

45 minutes later, Madame Halima showed. Which was fine except that the guy at the door thought I was some kind of well-dressed homeless person, I’d been sitting there so long. 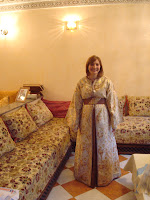 So we did bank stuff and went on our way for Caftan shopping. You remember caftans, right? I wore one to the weddings that I’ve been to, and they look a little bit like curtains (at times). This one here, I discovered today, cost about £500. I have been wearing a £500 piece of clothing, and not even realising.

Mine is now being made, which will take around a month. This Thursday I’ll go in for a basic fitting before all the embroidery gets added. Mine will be a little bit more modern. It is aubergine over the top with silver polka-dots below. If you want more of an idea, watch this at 1:50 to see the basic design. My sleeves will be capped a little more, but otherwise that’s prettymuch it.

Following this, we then met with Mr Aziz. This is where the galivanting began. Let’s bear in mind at this point that it is 2.30 and I haven’t eaten since 9. We went to get some forms signed. It took Madame Halima 20 minutes. We then went to the ‘Administration’ presumably to get something administrated. This was never explained to me. That took 40 minutes. I sat in the car. Apparently the people went to lunch and so they waited the whole 30 minute break. Finally at about 3 we went and had the most delicious sandwiches ever. Then another hour was spent getting watch batteries, onions and car parts. And now I am home, and totally ready to crash out. And it’s only 5pm.