So Evan, an American guy over here just said that. Like a angry black woman. It was awesome.

Today has been alright although I’ve been in a funny Sally-mood since last night, and so I found this morning’s class really annoying. And I got proposed to again in the taxi on the way here. And then we got asked to convert while we were having lunch. Actually, it’s just been a really weird day. More later because I have class now and then a meeting about the weekend trip. More on that tomorrow = )
Purple Jellybean because of a lack of things to say. 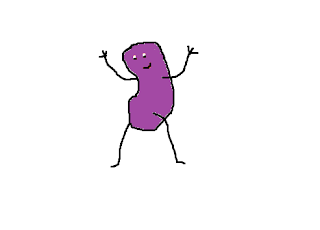 UPDATE: Evan doesn’t think my purple jellybean looks like a jellybean. I think he’s wrong to be honest, and he’s probably hurt Purple Jellybean’s feelings with his cruel remarks.