I accept that I have not necessarily lived up to blogging expectations over the last few days. I have been busy entertaining The Boy. He has seen the old medina, the mausoleum of Moulay Idriss, the areas of Rcif, Batha and Bab Boujloud and of course the famous Fes tanneries. Alongside that he’s visited the Ville Nouvelle, walked along the boulevard and had a few nice stops at cafes and restaurants.There are photos, but he won’t put them on Facebook until he gets back. He can be backwards like that. Good thing I like him really.

Today he met the parents. Again. He’s met my actual parents more than once, and they like him, and he is moderately not-scared of them. All good. Today the plan was… 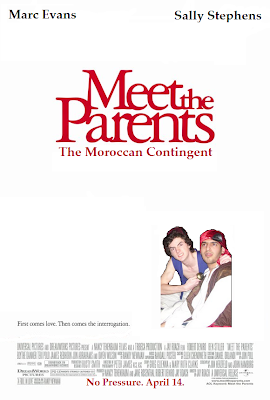 I’m hyping it up a little bit, because actually it was a lovely chilled out lunch. Mr Aziz wanted to be there but unfortunately he was called away to Meknes, so it was an introduction to Madame Halima principally.

We ate good food, had a lot of fun understanding each other in a variety of languages, and then The Boy and I left to let her carry on with her day. As far as meeting the parents goes, especially across a cultural boundary, it was pretty good.

More photos to come of our other adventures here in Morocco, and normal posting will resume on Monday when I get back into the regular and depressing school rhythms once again.