La FamiliaAs you no doubt remember, when I began writing this blog it was because I went on a year abroad to Morocco (and couldn’t be bothered to e-mail every day).

One of the big features of my time in Morocco was my amazing Moroccan family. I called them Mr Aziz, Madam Halima, BMB (big Moroccan brother) and BMS (big Moroccan sister). I’m still in touch with them, though not as often as I’d like given how important they’ve been in my life and to my development as a traveler and linguist. BMB is now married to a lovely lady and while I was in Spain I hopped across the strait of Gibraltar to go to their second wedding.

This blog post however, is not about that (I’ll cover that later). This is about my family in Spain. When I got there I had the option of trying to find a flat for myself for 3 months (all of which were tiny and hugely expensive), get myself a room in a flat of students (which is the norm there, as Granada is a big student destination), or find a family. The school, as in Morocco, offered the option of finding a “host family”, but I decided I could probably do it on my own. And I did.

I found Olga and Mario. They live in a lovely basement flat, about 3 minutes from the language centre with their dog Pepón. My room was lovely, the kitchen was well appointed, and we had a nice little courtyard. I sometimes sat and watched TV with them, but they also didn’t mind if I was out and about (and sometimes coming in all hours hilariously drunk, but that is also a story for another time). Living with them was amazing.

Like my lovely Moroccan family, living with Olga and Mario really brightened up my time in Spain, and gave me a very unique experience which I am so grateful for. No-one else lived with a family and they missed out because there is nothing like have a 5 year old to instantly love you and want to watch TV with you, and there is nothing like having a new Auntie figure to help you when you really need a fluent Spanish speaker. Even before I moved in with Olga I had some issues with my Spanish phone, and all I had to do was text her and she’d sorted it.

Not to mention that when Boyfriend came over to stay (twice, once at the start and once at the end) she was happy for him to stay with us, which I know most people wouldn’t be.

Honestly, if you’re going to live abroad, it’s all about finding a new family. You WILL have a better time. 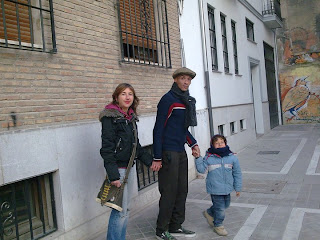