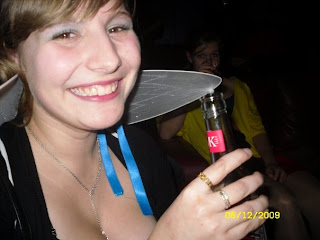 Morning. If you don’t understand the title then you belong in one of three categories.

Don’t worry, I forgive you. I didn’t exactly make a song and dance about it. I’m a big fan of birthdays, but I dislike being the centre of attention just because today was the day where I chose to push my little way into the real world (except I didn’t, but more on that later). Anyway, as a general celebration, I have decided that you can have three posts today in which to get to know me.


So lets start with some random physical information you might not have known about me.

– I have a scar on the second toe of my left foot. I got it when I managed to scrape said toe on a rusty gate. It bled loads, but I never realised it had scarred until about a year later. Don’t pay much attention to my toes.

– I really dislike my belly, but my favourite part of my body is my lower back. Clearly I’m a fan of opposites. I think my belly is too chubby.

– I am 5’4″ which makes me just taller than ‘petite’ size. Until last year I thought I was 5’3″ which would have made me the second shortest person in my family.

– I don’t have any allergies, but when I eat certain things I get an itching sensation on my nose, a little bit like I have walked through a spiders web. It’s weird.

– Everyone says I look like my Mum, but I think I look much more like my brother, who in turn is told he looks like his Dad. I think we can conclude that we’re both a mix.

– I sleep on either my back or whatever side is facing away from the wall (or the other person, if I’m sharing a bed). I have no idea why though I’m sure there is some medical explanation.

So there is your first insight into me. Interesting times. Have a Happy UnBirthday everyone, until later when you can hear about some other stuff relating to me.